I have written about the kindness of people over and over since I started this adventure. Every time I'm on the receiving end of a random act of kindness from a stranger it confirms my suspicions that the world is made up of amazing individuals; it's not the scary world we see on TV.

If you've been with me since the beginning you may remember the mystery man who appeared at my last yard sale and handed me an envelope with a donation for my trip. To refresh, a gentleman approached me, I introduced myself and he replied by saying who he was was not important. We talked about travel and he briefly shared some of his own experiences. He handed me an envelope, told me to put it in a safe place and wished me well on my travels. He was not someone I knew and was very clear on remaining anonymous. Rarely do you see someone make such a gesture and absolutely refuse any kind of praise or recognition. My father says there's a name for someone who secretly gives (it appears in his crosswords a lot); angel.

Yesterday the mystery man struck again, this time in the form of a mystery woman. She walked into Argyle Fine Art and handed over an envelope with my name on it while keeping her lips sealed. When asked if the envelop should be passed on to me she replied simply, yes. When asked if she's like to say who it is from she said nothing, quietly slipping out the door. Inside was a donation and another vintage postcard with a similar message as the first; "for your next trip, vaya con dios". 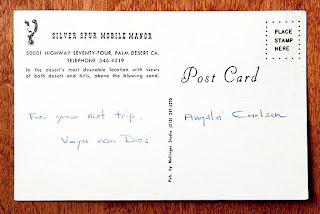 I'm still in a state of shock.  Yes, the donation will be put to good use but it really is the gesture that brings me to tears. There must be something about what I originally considered a selfish venture that has struck a cord with these two individuals. I know from emails I have received that what people are relating to is the idea of freedom. People's letters talk about how they traveled when they were younger or they always wanted to travel but 'life got in the way'. The barter van blog is a way for them to live vicariously through me. I had no idea starting out how many people have similar dreams of the open road and how few actually get the opportunity to do it. I thank my lucky stars every day and never forget those who support me and cheer me on as I get ready for the next adventure.

Whoever and wherever you are I hope you are reading this. Thank you isn't near a strong enough sentiment for what you have done.

You are my angels.

Do you have an angel in your life or have you been one to someone else?

A look at the show

Yesterday I had a couple interviews at the Gallery about my exhibition. I will be sure to post both interviews when I see them. One was with the Chronicle Herald newspaper and the other was with CTV. In the meantime, to the left under "In the News" is a blog post about my opening by journalist Nicole Trask for Halifax Magazine.

While there I took the opportunity to document my show and thought I would share what a wonderful job they did displaying my work. I love being represented by Argyle Fine Art. 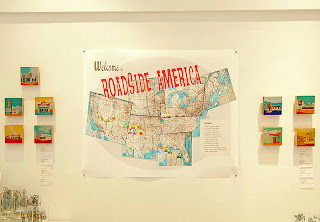 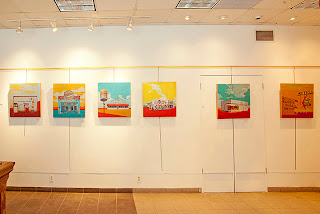 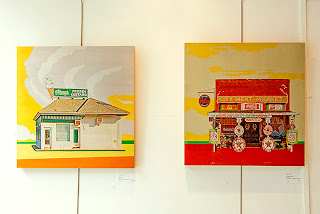 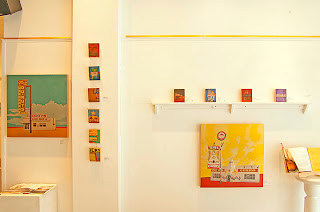 Opening night and other ramblings.

It's a few days after the opening reception of my show and I have the all so familiar feelings I get after all the excitement is over.  I am someone who always needs a project so after months and months of working towards making this exhibition happen I am now kind of projectless; for now. I get a bit of a post opening blues but don't get me wrong, it's nothing serious. It's almost like when an adrenaline-inducing roller coaster slowly comes to an end. Or like raising children and then sending them off into the world to see what happens. (ok, not actually, but I think you get the gist of the metaphor) It is both exciting and makes one vulnerable. I wouldn't trade any of this roller coaster though and will most definitely be doing it as long as I'm able.

The reception was wonderful and I am so fortunate to have support and interest in what I'm doing. I saw lots of familiar faces and had the opportunity to meet some new people who are very involved in the arts here. Sometimes a simple conversation can bring about some new ideas and I will be working on some new things very soon. The most important being revisiting the Barter Van concept and gearing it towards trading with artists of all genres instead of the general public who need to pay their bills and aren't necessarily interested in art. As much of a loner as I am I'm beginning to understand how important it is to have people to bounce ideas off of and I think interacting with creative people will make my next venture out all that much more inspiring. But more on that later.

One of my favorite things about my travels and this show is the stories other people tell me of their own past adventures or future plans. My choice to give up my belongings and comforts have inspired people to follow their own dreams. This, in particular, is a wonderful feeling since I have been inspired by so many myself. Sometimes I have to pinch myself. I'm still floored when someone likes what I've made enough to purchase it and have it in their lives. I don't think I will ever get used to that. It's surprising and flattering every time. There's nothing quite like actually living out your biggest dream. It can be done.

Next up in my plans is to put this hide-a-way house back to it's cozy self. I have to start packing up all my materials and load the van back up for this coming weekend when I will be moving in with some friends for a while. I'll be starting work with my sister's moving company and in my spare time revamping the barter van concept. I would love to get back on the road for June but I think that's quite optimistic. Even so, it's important for me to set a date and work towards it. Someone asked me at the reception if I'm panicked or worried about my future. The answer is no. You would think being homeless with an empty bank account would cause some panic but it doesn't. My answer is that I'm lucky enough to have the support of my friends and family and no matter what happens I won't end up on the street. That's all I need to know to have the confidence to keep pushing forward. Plus, I'm just getting started!!

It's been quite a while since I've popped by my blog. As you can imagine I've been spending all my time putting together my exhibition, which I titled Roadside America. Working away today, I had the realization this is the first time I've had the luxury of preparing a show without having to work a day job. No wonder my stress level has been low. Well, relatively low. There's always numerous silly little technical difficulties that happen to make you slightly panicky but to be able to deal with each issue immediately is a gift.

Along with working on the exhibition pieces I've put together a map showing my route across America and back. I photographed the actual maps I used and pieced them together in Photoshop, lining up the highlighted drive. While traveling I encountered many people who were shocked that I didn't have a GPS. They couldn't believe I wasn't getting lost but the truth was I did get lost, quite a bit, but it often lead to me seeing something cool or talking to someone interesting. So, I became much better at reading maps and knowing my north from my south and east from west. A handy thing to know. 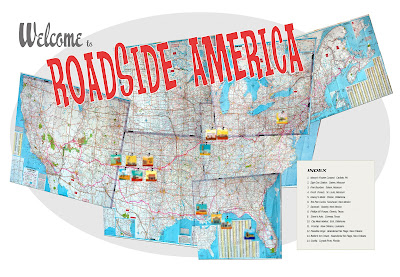 I thought it would be interesting to use the compiled maps to indicate where I took the original photographs used in the final pieces. (In the map above the images are blurred. A good friend of mine has been doing her best not to see any of the images beforehand.  I wouldn't want to ruin the surprise for her now would I?) The map will be on display during the length of the show to highlight my route and to lend context to the work. Looking at the map now all I see are the places I haven't been yet; so much left to explore. Soon. Fingers crossed..

I hope people have the time to come say hi to me during the opening reception of American Roadside. It will be at Argyle Fine Art, 1559 Barrington Street Halifax, Nova Scotia from 7-9pm on Friday, March 22nd.
Posted by Angela Carlsen 3 comments