The Boler is now at a stage where I can take my time and pick away at the interior renos. The exterior is almost completely done with just the wiring to redo. I don't have to work at such a frenzied pace now that it is sealed up for the winter. No more covering it with a tarp every time it rains!

Going through the photos I've taken along the way shows just how much work I have put into this thing and I thought it would be interesting to put together some montages; partly for myself and partly as a record of what's been done so, if/when I decide to sell it, the potential buyer can actually see for themselves what's been done. 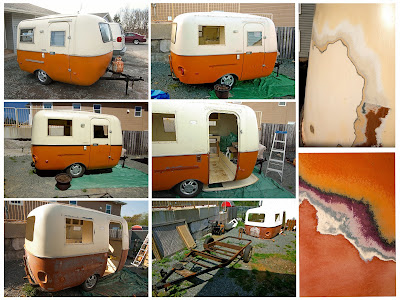 It took me the better part of a month to sand off the 7 layers of paint coating the exterior. Everything was removed from the shell, and I mean EVERYTHING. Once it was sanded the shell was lifted off the frame which was then sandblasted, re-welded, undercoated and shell put back on. All the holes, cracks and damaged spots were then filled, sanded, filled and sanded again in preparation for painting. This includes a large area under the back window where I found a large crack after all the sanding. My guess is there was an accident at some point where the spare tire was hit and caused the bracket to smash in the back. That happened somewhere between layer 5 and 7 of the previous painters.Once the whole shell was painted white it was given a new life! 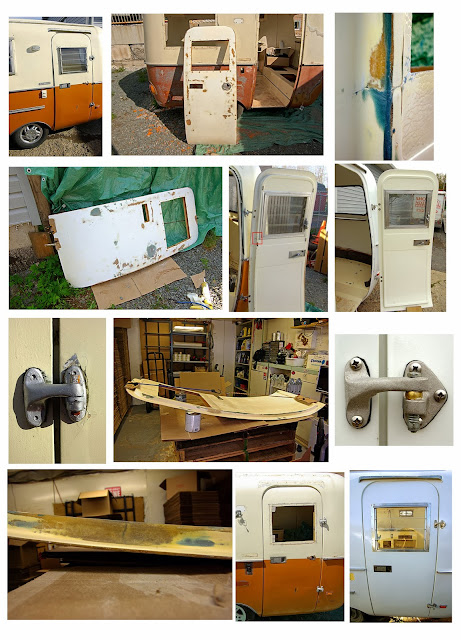 Once I had the door off and started sanding it I noticed some problems there as well. Fist, there was a large hole under a piece of old hardware on the front of the door. It had been filled in by a previous owner and at some point that patchwork gave away. Second, when I removed the window I found a crack in the interior of the door which I would have to re-fiberglass; something I was very intimidated to do. Fortunately both the hole and crack worked out well and I think you'd be hard-pressed to find the old damage now. I did away with the old hinges and bought new ones from Scamp trailers. The door still has some fitting problems but I know this is a very common thing with these trailers.

All the hardware on the outside of the trailer looked like they were aluminum but were actually also painted with 5-7 layers of paint.  I went through a lot of paint remover and SOS pads to get them back to original. The vents are a bit pitted but I would rather that then peeling paint. The Boler logo, although also pitted, shines like new. 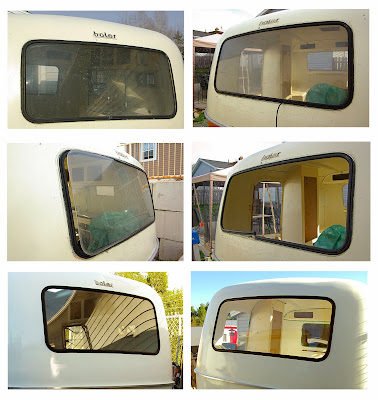 The two end plexi windows were replaced by brand new cut sheets of Lexan and installed with new rubber seals. Once again I was nervous to remove these but they come out easiest of all. Getting them back in would have been a frustrating task but luckily the guy who cut the new windows offered to come install them for me. Some things are better left to the professionals. 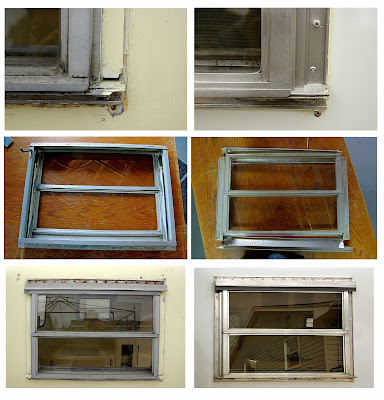 I don't have the money to replace the windows so I worked to restore the original ones as best as possible. The two side windows, small one over the stove and lever window in the door were all taken apart, stripped of paint and scrubbed clean of dirt and mold. Many of the screws holding them together had to be pried or drilled out and new screws sourced to replace the old ones. The two side ones received new window cranks and all of them brand new screens. They are so shiny and beautiful now.

So, now I have the inside to get to. The cabinetry will need to be painted, cupboard and closet doors made, floors done, back splash put up and shelves built. The inside walls have already been scrubbed down twice with TSP, once with bleach and painted with two coats of primer and one coat of mold and mildew paint. That alone made a HUGE difference.