This day made tears...in the best ways.

You ready for this?!

Yesterday morning I got ready to leave the motel and Bob, the man who checked me in, was cleaning the room next to mine. I gave him my key and thanked him for his hospitality. He asked me about my tattoos and my history/travel plans. We chatted for a while and he questions me about my cooking abilities and what I eat on the road. I told him I love to cook, have a stove, but haven't been eating as healthy as I would like. Unbeknown to me the plants surrounding the motel lot is his vegetable garden where he grows peppers, eggplant, beans of all types, garlic, ginger etc. He and his mother are vegetarians and eat mostly from what they grow. Bob lets me pick some eggplant and peppers. He is proud of what he has. His mother comes out and gives me more eggplant and picks some hot green peppers to go with them. Their generosity, as it turns out, comes from me taking an interest and simply talking to them. They are east Indian. He tells me sometimes people come in to the office, see him and turn around and leave. He said people 'don't mix' which he doesn't understand. “We all bleed the same don't we? Just because our skin is a different color, we are all still human" he says.  He points to me and then back to himself and his mother. She adds, “We're all the same. Human”. They shake my hand and wish me safe travels. I leave with teary eyed with my gifts wondering why people are they way they are. 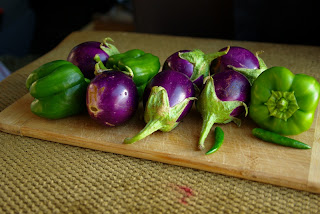 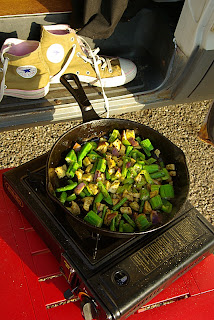 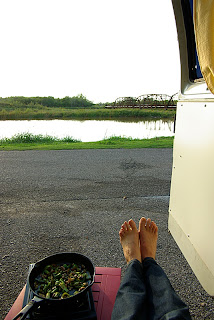 A couple hours down the road I passed a vegetable stand in someones barn. Seeing as I'm out of food and want to get more local produce I turn around. The first thing the woman says to me, before even saying hi, is, “Do you want a free dog?” This little thing comes running at me, tail wagging, but when I reach down to pet her she cowers and puts her paw up almost the way a person would if they were going to be struck. She wants to come to me but is shaking in her fur. I didn't get a good vibe from the bottle-blonde lady at all. She assured me the puppy had all her shots but couldn't produce any papers to prove it. I was not convinced at all. When I tried to pick her up she ran away, following the woman back into her place. So, I decided she wasn't for me. But I couldn't drive away. I got in my van and just sat there, engine idling. I thought to myself, why don't I go back and ask the woman if I can see if the puppy likes my van. She opened her door when I returned and I asked her. The response was, "I don't care what you do. She's probably hiding under the stairs”. So that was it. Game over. I grabbed her and drove away with the little one shaking on my lap. I mean, c'mon, could you have left this thing behind? 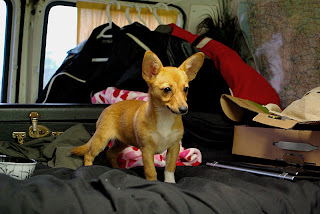 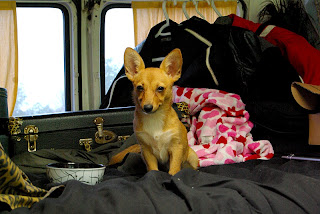 We drove for a long time before she stopped shaking. Being that it was Sunday I was pretty sure there wouldn't be a veterinary clinic open but I wanted to get her checked out as soon as possible. I checked for flees but that's all I really knew how to do.The next big town had one of those mega pet stores so I went in to at least get her some food. The behemoth of a store actually had a vet inside so $200+ later she came out in great health with her first shots and her rabies tag.

Some of you know, and some don't, that I adopted a beautiful black lab mix boy a couple months before I left. I don't want to get into the details about why he didn't end up staying with me but let's just say it was a heartbreaking experience. I thought about looking to adopt again but my half-assed attempts to find a new companion turned up nothing. Like I've said previously, I'm not the most spiritual person but to have this tiny, travel size girl show up is a bit of a mind-blower. I have friends who assured me I'd find a dog on my travels but I wasn't even sure if I wanted that to happen. For now I say, thanks again universe. For everything.