A trail in the Everglades is not necessarily a trail.

After spending the night camping too close to other people for our liking we head to the most remote camping spot on the map. It's a free site which makes it all the more better. With a van full of provisions we head down the 25 mile dirt road to a hidden spot where we'll set up home for a few days. It's what's referred to as primitive camping without power or water hook-up. 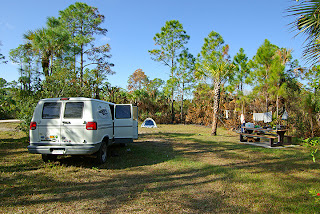 On the way there Larry is excitedly looking for any kind of reptile he can interact with. There are alligators lining the road on both sides and birds galore but what he really wants to find are snakes. Before becoming a hobo he raised and bred reptiles. With a shout of "STOP, STOP, STOP!" I just barley break in time to avoid running over our first snake. Larry jumps out before we are even at a full stop and before I can blink he has the snake in his hand. I'm not afraid of snakes but I certainly wouldn't go picking them up without the experience of knowing how to handle one. Have you ever seen such a happy person?! 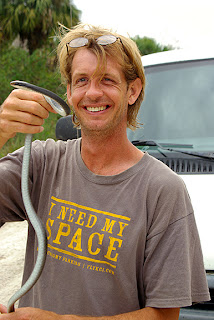 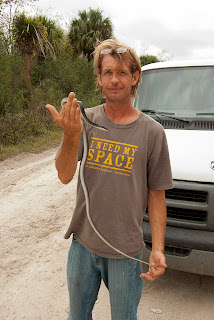 The next morning we he makes a big breakfast of oatmeal and bananas, I pack a lunch and some water and we head out on what we think will be a day hike in the Everglades. I talked to the ranger at the gate and he gave me a map of the trails and told us where to start. Now, let me just say we may not be the brightest tourists but in our defense it looked like the trails would be marked and easy to follow. I mean, there's a map of them after all. We set out at 10:30. In the beginning we are excited to notice every bug, plant, lizard and bird we see. We walk thorough tall grass, between pine trees, under palm trees and through cypress swamp all the while happily chatting about what we see. 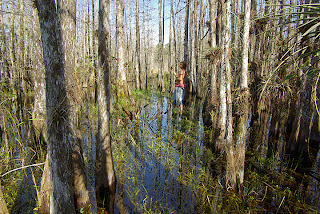 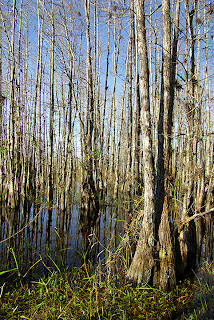 I'm guessing we lost the trail after we walked through this area of swamp. The trail posts we found after wading up to our thighs in water had either rusted so bad the tags were gone or melted into an unrecognizable twisted mess. It was about 3:30 and we would be out of sunlight soon. After  trying to retrace our steps several times I was terribly turned around and everything looked the same. Larry looked at me and gave me two choices. We either continue to try and find the swamp we walked through and therefore get back on the trail or I follow him while he makes his own way out. "But you don't know what's out there" I say. "No, I don't" he replies. I'm calm on the outside but inside I'm convinced we are going to die out there with no ID on either one of us to identify the bodies. We didn't even have matches to start a fire! With clenched teeth I agree to follow his instincts. He excitedly starts off towards the sunset. We had the sun to our back on the way in so it made sense to have it in front of us on the way out. I follow him in silence for what seems like forever and then I ask him, "are you not panicked at all?" Picking some kind of plant, he replies, "no, I don't panic until the end" and he smiles. I have to admit his calmness and confidence helped me keep my own worries in check. The only thing I could do to help get us out was to follow in silence and not freak out at him.

Then came the sound of cars. The highway! A half hour later we reached the road, but where the heck were we? This was not anywhere near where we entered the 'trail'. Luckily there was a map where we exited as it was an entrance for wilderness camping. We would have to walk about 5 miles up the interstate and then hop a tall, barbed wire fence to get back into the preserve and then walk another 4 or 5 miles up the dirt road to our site. We were both soaked and muddy from the knees down. My rubber boots were almost filled to the top with swampy water and the air was getting colder with the disappearing sun. We set off walking anyway. There was no choice. Okie had been in the van all day and I worried about her.

We walked maybe a mile or so when I heard a vehicle pull over behind us. It was Alberto, a Road Ranger, stopping to find out why we were walking on the I-75 when it's illegal to do so. We told him our story and he wasn't surprised by it. Not long ago a Norwegian man got lost for 2 days in the Everglades. 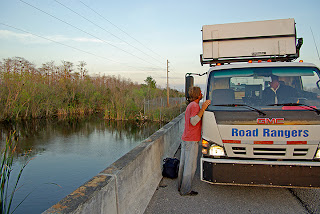 Alberto called a Highway Patrol car to come take us back to Bear Island. While we waited he offered Larry a sweater and me some chocolate. He had a bag of bars with him because he was trying to quit smoking and thought they would help. He shared many stories with us about other people he had found along the road while we waited for the patrol officer. Jason arrived within a half hour and he drove us to the entrance of the campground, leaving us to walk the one mile or so left to get to our site. It was the longest mile I've ever walked and the happiest I've ever been to put on dry socks.

In the morning we decide we'd seen all we want to see of our current location so we drove further down the 41 and enter the Collier-Seminole State Part in Ten Thousand Islands area. Once again we are told there are no camping spots left but after talking to them for a few minutes they decide to put us in the youth group camping site all by ourselves. We were the happiest campers there I swear. We had a huge area all to ourselves with our own driveway. We are both ridiculously lucky people. 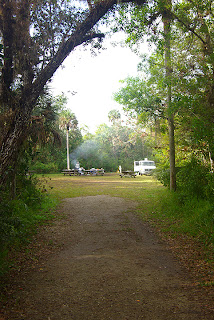 As we sat drinking and chatting over the fire that night we hear various shouts of happy new year from the campers outside our little haven. Both of us are surprised it had gotten so late. We wish each other a happy new year and I run off to bed to get away from the relentless mosquitoes. By the end of our adventure we are both bitten pretty badly up and down our limbs. We celebrate the new year the next day with a canoe trip down the canals. It's a perfect day. The sun is shining, the water is calm and we are happy to paddle our way through our hangovers.

For the second time I drop him off at the edge of town and watch him disappear into the woods. This time he heads towards his home. I beep the horn and wave good-bye while Okie barks out her own farewell. She really likes that guy. It's a hard thing coming to realize I will very likely never see him again. I am very grateful to have made such a friend and enjoyed traveling with him. I remember saying before I left home I couldn't imagine finding someone who would want to travel the way I do. Larry is that person and I enjoyed our time together. I wish him the best of luck finding his way and hope we will never lose touch completely.
Posted by Angela Carlsen